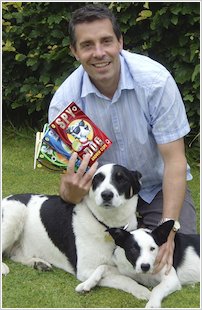 Andrew Cope was born in Derby in 1966. He is a teacher, writer, a huge fan of Derby County football club and author of the Spy Dog and Spy Pups series. He really does have a dog called Lara who has one sticky-up ear and came from the RSPCA, but he’s not sure if she is actually a highly trained secret agent. Andrew lives with his wife and two children.

Andrew Cope has won several awards for his Spy Dog series, especially those voted for by children. These include the Richard & Judy prize, Red House award, and Nottingham and Doncaster Children’s Book Prizes.