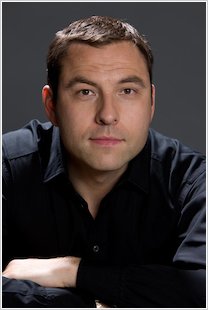 David Walliams is a comedian, writer and actor and is best known for his partnership with Matt Lucas on the hugely popular sketch show Little Britain, and as a star judge on Britain’s Got Talent.

David is also well known for his charitable work for Sports Relief, part of Comic Relief. He took up swimming in his youth because he was overweight, and has subsequently completed long distance swims of the English Channel, the Strait of Gibraltar and the River Thames, raising millions of pounds for charity!

In 2008 David’s first children’s book The Boy in the Dress was published, illustrated by Quentin Blake. He has gone on to take the children’s literary world by storm, dominating sales charts and twice winning the National Book Awards Children’s Book of the Year. His books have now been translated into 40+ languages, and also include picture books illustrated by Tony Ross.

David Walliams has twice won Children’s Book of the Year at the National Book Awards, for Ratburger and The Demon Dentist, along with many regional prizes including the Sheffield, Doncaster, Stockport and Lincolnshire Young People’s Book Awards.