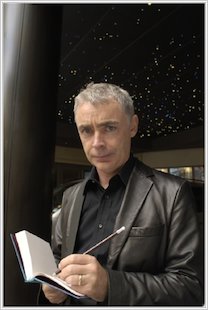 Eoin Colfer (pronounced Owen) was born in Wexford on the South-East coast of Ireland in 1965, where he and his four brothers were brought up by his father (an elementary school teacher, historian, and artist of note) and mother (a drama teacher). He first developed an interest in writing in primary school with gripping Viking stories inspired by history he was learning in school at the time!

After leaving school he got his degree from Dublin University and qualified as a primary school teacher, returning to work in Wexford. He married in 1991 and he and his wife spent about 4 years between 1992 and 1996 working in Saudi Arabia, Tunisia and Italy. His first book, Benny and Omar, was published in 1998, based on his experiences in Tunisia. A sequel followed in 1999, followed by some other books. Then in 2001 the first Artemis Fowl book was published and he was able to resign from teaching and concentrate fully on writing. As well as the bestselling Artemis Fowl series, he has written the fantastic Legend of… stories about two naughty brothers, Will and Marty, and the sixth instalment of The Hitchhiker’s Guide to the Galaxy.

He says, “I will keep writing until people stop reading or I run out of ideas. Hopefully neither of these will happen anytime soon.” He lives in Ireland with his wife and two children.

Winner of the 2001 British Book Awards Children’s Book of the Year for Artemis Fowl and the 2005 North East Book Award for The Supernaturalist.