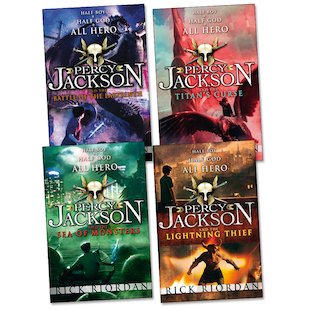 “Look, I didn’t want to be a half-blood. I never asked to be the son of a Greek God. I was just a normal kid, going to school, playing basketball, skateboarding. The usual. Until I accidentally vaporized my maths teacher.”

What if the Greek gods of Olympus – Zeus, Poseidon, Athena and their crew – were still alive today, falling in love with mortals and having children who might become great heroes? Well, they are! And ‘troubled’ NYC kid Percy Jackson has just discovered that he’s one of those half-blood children. Sounds great – except that most of them are eaten alive by monsters by the age of twelve! Only a few such children ever make it to Half-Blood Hill, the Long Island summer camp where young demi-gods are trained. And if Percy doesn’t have his work cut out battling legendary monsters such as the Minotaur and evil god Kronos, he’ll also have to face up to an ancient prophecy which says he must save or destroy the world – all by the time he turns sixteen!