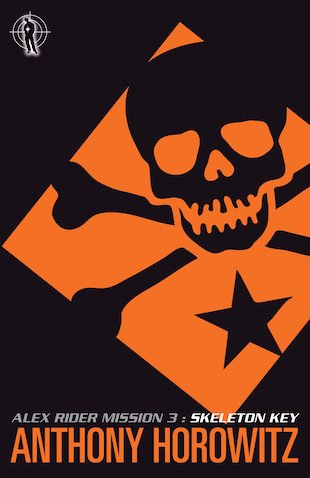 Night came quickly to Skeleton Key. The sun hovered briefly on the horizon, then dipped below. At once the clouds rolled in – first red, then mauve, silver, green and black as if all the colours in the world were being sucked into a vast melting pot. A single frigate bird soared over the mangroves, its own colours lost in the chaos behind it. The air hung close. Rain hung waiting. There was going to be a storm.

Sharks. Assassins. Nuclear bombs. Alex Rider’s in deep water. On an island paradise off the coast of Cuba, insane Russian General Sarov is hatching explosive plans to rewrite history the nuclear way. Teenage superspy Alex Rider has the job of stopping him. Alone, equipped with just a handful of ingenious gadgets, Alex must outwit a crafty madman’s mind, as the seconds tick down towards the end of the world.