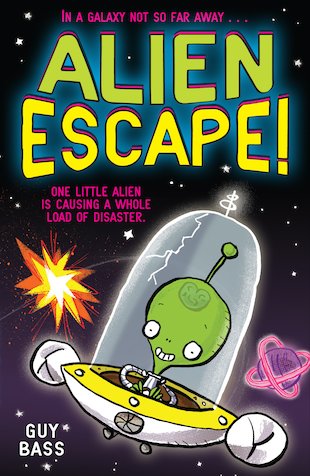 Hex is the worst space invader ever – the dunce of Planet X. He hates violence and is terrible at flying. He’s just not cut out to shoot ray guns and disintegrate enemy scum! So going to join his dad on Planet Earth seems like a fresh start. But how is our hapless hero going to get away from his own prison-like planet? He’ll need to steal a hypersaucer under the nose of an angry Empress who wants to execute him for treason. Worse still, Hex can’t fly a spaceship. Even if can dodge the army’s ray cannons, how will he make it to Earth in one piece? Join our unlucky alien hero as he causes chaos in a galaxy not so far away, in a hilarious new book from Blue Peter Award-winning author Guy Bass.