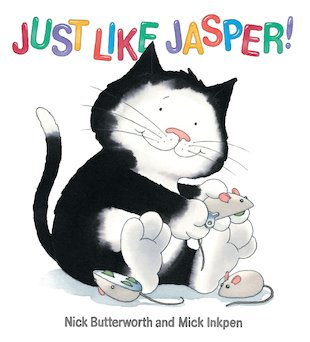 Jasper the cheeky kitten is on the hunt for his perfect toy. He’s buying it with his birthday money, and it has to be absolutely right! But – just like Jasper! – he can’t make his mind up. He plays with just about every toy in the toyshop… bubbles, a car, a robot, a Jack-in-the-box. But which will be the perfect toy for him? Filled with things to seek and find, plus deliciously bright and simple pictures, this is a funny, cute and colourful treat from the star team of Mick Inkpen, creator of Kipper, and Nick Butterworth, creator of Percy the Park Keeper.