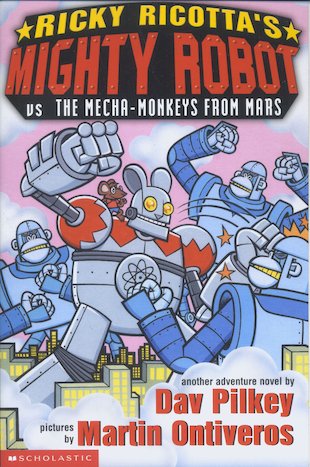 Ricky Ricotta and his Mighty Robot are in big trouble. After crashing the Ricotta family van while using it as a skateboard, they need to earn some fast money to pay for repairs! But while they’re thinking about how on earth to come up with the cash, mean Major Monkey is making plans to enslave mousekind! Far away on the planet Mars, Major Monkey has had his eye on Earth for some time now – and he’s noticed that all the villains who try to conquer the planet keep getting foiled by Ricky Ricotta’s Mighty Robot! So the first thing to do is get rid of that robot! When the Major tricks Ricky’s robot into going to Mars, how will Ricky rescue his pal – and defeat a whole army of mecha-monkey invaders?