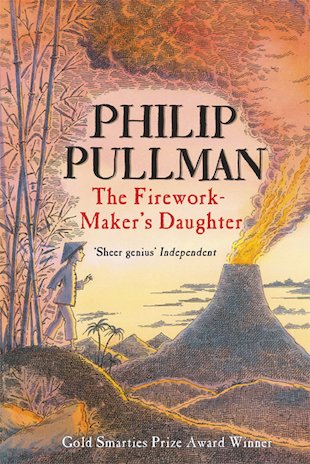 Lila dreams of being a firework-maker like her father. But it isn’t all about creating Crackle-Dragons and Golden Sneezes. Like every firework-maker before her, Lila must also make a nightmarish journey to battle Razvani, the evil Fire-Fiend! On her journey, she outwits pirates, outlandish beasts and a furious emperor. But will she survive the Fire-Fiend’s blazing wrath? Can two friends and the King’s white elephant save her? Inspired by Philip Pullman’s own love of fireworks and their names – ‘Incandescent Fountain,’ ‘Golden Vesuvius’ – this exotic story crackles with suspense and wonder.

“One of those rare books with a confident magic all their own… delivered with a lightness of touch that is sheer genius.” Independent