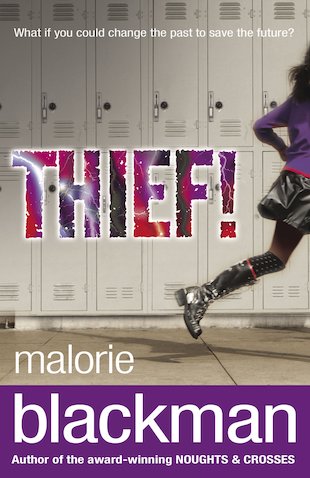 “Lydia’s last thought before darkness closed over her mind was that the strange, swirling storm had trapped her.”

When she is wrongly accused of being a thief, a furious Lydia flees onto the moors – and is snatched by an extraordinary storm which whirls her into the future. But in this computer-dominated future, her home town is ruled by a cruel tyrant… someone with whom Lydia turns out to have a great deal in common. Before she can get back to her own time, she must face a terrifying confrontation… Blending a gripping futuristic fantasy with a moral message about what happens if we refuse to forgive and forget, this is Malorie Blackman at her dazzling best.

“Spellbinding… must surely establish Malorie Blackman as one of today’s outstandingly imaginative and convincing writers.” The Junior Bookshelf

“Few writers can sustain a plot as well as Malorie Blackman.” The Sunday Telegraph