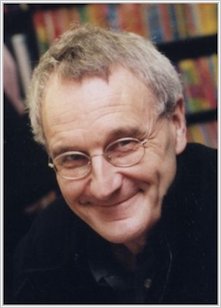 Born in 1949, Jeremy Strong has spent most of his life in a dream. At the age of three he fell out of a first floor window and landed on his head. He was in hospital for a week, with a broken arm and a headache. Luckily he recovered, although he was always accident-prone as a child. He broke various bones and had stitches for big head cuts. This was because he spent most of his time out in the fields near his house playing. The ‘stitches score’ went something like this: Riding a bike at a thousand miles an hour – five stitches. Falling out of tall trees – four stitches. Playing kiss-chase – three stitches.

At school he enjoyed playtime, lunchtime, and half past three. He also liked making things up and writing about them. He spent his teenage years writing poems for his girlfriend, Susan, until she gave in and married him.

After his eventful childhood he eventually became a primary school teacher, and is now a full time writer. He has written over 70 books, including the hugely popular Hundred Mile an Hour Dog books.

Jeremy has won lots of awards including the very first Manchester Book Award for Stuff, and the Children’s Book Award for The Hundred Mile An Hour Dog in 1997.