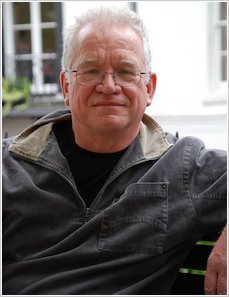 Michael Terry was born in 1947 in Folkestone on the Kent coast. After living abroad and moving around the country he arrived back in Folkestone, there he later went to Art College from 1964 to 1967 studying graphic design and illustration.

In 1967 he moved to London and worked in various design groups and advertising agencies as a designer and typographer.

In 1972 he became a freelance illustrator, working in advertising, editorial and publishing for clients including Cadbruies, Ikea, British Airways and Bloomsbury Children’s Books. During this time Michael was awarded a D&AD award for illustration and a Mecanorma award for best poster illustration.

Since the mid 90’s he has been equally successful as a writer and illustrator of children’s books. His best known books include The Selfish Crocodile, Little Hotchpotch, Rhino’s Horns and Here Comes the Crocodile. He has also illustrated numerous Dick King-Smith books for Puffin Books.

He now lives and works by the coast in Kent and has four sons.